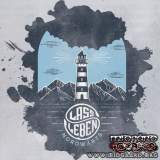 What happens when you block free thoughts and a bunch of creativity into a lighthouse, record it all and put it on a CD? Right! You can hear damn good music in a lighthouse! Joking aside. With "Nordwärts" the guitarist of Feindnah shows us how identity music can sound in 2019. Here, modern sound meets really good lyrics, which encourage reflection and inquiry. Vocally, the album was very varied varied. So there are not only the well-known clear vocals but also decent shouts on the ears, which blend in wonderfully with the overall concept. With the title "Out to sea" we have created, in our opinion, even an absolute hymn, which buzzes in the head again and again, even if the album is long over. There is definitely not a song that you would throw from the album, as it fits from front to back! With twelve titles and a playing time of around 50 minutes, "Nordwärts" is, in our opinion, a definite asset to the music scene.